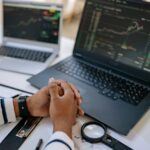 Are you interested in learning how to go about day trading? If yes then here is a free beginners guide to day trading that I believe will of interest to you, my reader.

And if you enjoy it, make sure to share socially.

Day Trading is a form of speculation in securities in which a trader buys and sells a financial instrument within the same trading day, so that all positions are closed before the market closes for the trading day to avoid unmanageable risks and negative price gaps between one day’s close and the next day’s price at the open.

Traders who trade in this capacity are generally classified as speculators. Day trading contrasts with the long-term trades underlying buy-and-hold and value investing strategies. It is made easier using day trading software.

From Wikipedia, the free encyclopedia: https://en.wikipedia.org/wiki/Day_trading

The Beginners Guide to Day Trading

Buoyed by charts, your trading strategy has performed incredibly, netting massive returns. If you’d like to trade for a living, we’ve put together some advice. Here’s what you should know to get started as a day trader.

Figure Out Your Risk Tolerance

First of all, everyone has to determine how much they’re willing to risk on a trade. For some people, they’re not worried about losing most of what they’ve invested. If you’re low on funds, the risk might not be as trivial, though.

So, it’s important to understand how much risk you’re taking on each trade. Otherwise, without knowing the risk, your losses could be drastic. That’s why it’s so important to calculate risk before trading anything. We’d suggest saving until you’ve gathered enough money to trade. Then, only use what you’ve saved to start.

You don’t have to risk any real money while starting. Instead, you can use them to try paper-trading for a while. This is when your trades don’t cost any actual money. However, everything you’ve invested is still subject to the market’s movements. So, if you’ve made good trades, your returns will be high.

Paper trading is an easy way to learn the basics. Since there’s minimal risk, mistakes won’t cost you much. They’re much easier to view as learning lessons when money isn’t on the line.

Use Limit Orders to Prevent Losses

Once you’ve tried paper trading, it’s time to enter the real market. Until now, you’ve never had to put any money up while making trades. Since you’ll risk some, stop losses are vital.

Setting a stop loss can prevent you from losing an entire position. They work by triggering a sell order if an asset’s price falls below a certain point. Then, your account will receive anything gained from its sale.

Trading computers have grown in popularity because of their performance. When using regular ones, lag becomes a major issue during trades. If you can’t execute them quickly, it’s not uncommon to miss opportunities altogether.

So, if you’re considering this industry, investing in good hardware is vital. Otherwise, you’re competing against others on an uneven playing field. Everyone with good hardware will execute trades faster than you can. So, don’t hesitate to invest in new computers if you’re just starting. They’re an investment you’ll be happy you’ve made once they’ve paid off.

After seeing some returns, investors often double down. Then, once they’ve put more in, their investments start tanking. They’ve shot themselves in the foot by investing more instead of harvesting profits. When your investments have gained quite a bit, take something out.

That’s the only way you’re able to generate profits in the end. Even if your assets have risen, none of that is yours until it’s sold. So, don’t let too much accumulate without selling something. Otherwise, you could lose what you’ve earned by keeping everything invested.

Set a goal when investing in anything and keep track of it. Once an asset hits your goal, sell it, no matter what. That way, you’ll actually gain something from the investment.

As we mentioned, emotions can be a trader’s worst nightmare. If you’ve stuck with a plan for long enough, it’s probably profitable. However, when something unexpected happens, our emotions can get intense. If your emotions have felt strong, try taking a break from trading. Otherwise, they’ll start influencing decisions, decreasing their effectiveness.

Usually, our emotions become less overwhelming with time. After you’ve traded for a few years, they won’t be as tough to manage. So, focus on building good habits while you’re still a beginner. That’s going to make it much easier to stay in the industry overall. The better you are at controlling emotions, the better you are at trading.

Day trading is a type of short-term investing strategy. By following the market, investors can earn enough to make a living. However, you must develop the ability to manage your emotions. They’re what holds investors back most of the time. If you can control them, becoming profitable shouldn’t be a problem.

About the Author of “The Beginners Guide to Day Trading”

Regina Thomas is a Southern California native who spends her time as a freelance writer and loves cooking at home when she can find the time.

Regina loves reading, music, hanging with her friends and family along with her Golden Retriever, Sadie. She loves adventure and living every day to the fullest.

If you wish to submit an article to be published on this blog, please follow the instructions on ~~> “Write for Us“.